Wales defeated Belgium in an exciting and evenly matched quarterfinal. Having come through the same qualifying group, the two sides were familiar with one another, a factor that seemed to benefit Welsh manager Chris Coleman more than his Belgian counterpart, Marc Wilmots.

Though Wales have mostly used a 3-5-2, with Gareth Bale and either Hal Robson-Kanu or Sam Vokes above a three-man midfield including Aaron Ramsey, Coleman instead opted for a 3-4-3 formation not unlike the one he had used in the opening game against Slovakia. The difference was that in that game, Bale was the central striker, whereas here he joined Ramsey as one of the flanking attackers. Both were narrowly positioned, so that the formation was really more of a 3-4-2-1.

Bale started on the left at the beginning of each half, but quickly moved to the right of Ramsey and spent the majority of the game in this role. More interestingly, Ramsey tended to play in a higher position, with greater license to roam than Bale. This increased over the course of the game, as Bale dropped deeper and Ramsey traversed the attacking line. In an interview on the qualification campaign, Coleman talked about how defender Jan Vertonghen never allowed Bale any space in behind. Bale’s deeper positioning may have been an attempt to frustrate a Belgian defensive scheme aimed primarily at stopping him rather than the Welsh team as a whole.

Belgian manager Wilmots started with an expected formation and personnel, given the back line issues he was facing (Vertonghen injured and Thomas Vermaelen suspended). Belgium started the game strongly, dominating possession and drawing yellow cards on both Ben Davies and James Chester. The second of these came shortly after Radja Nainggolan’s wonder strike from 26 yards out, all of which made it look like Wales were in for a long afternoon. 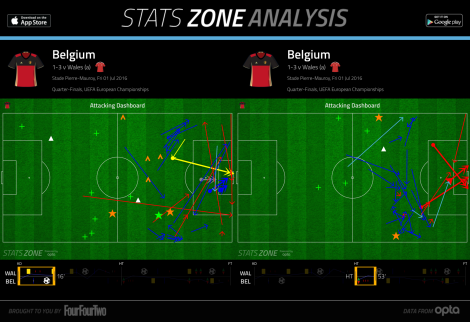 Belgium had a similar spell of threatening possession to start the second half, and a longer spell in control once they were trailing Wales from roughly 74′-82′ (Belgium had 58% 2nd half possession overall).

But Wales weathered each of these spells and responded with their own goals. This success was down to two factors. First, the inexperience of Belgium’s injury-riddled defense cannot be overlooked. Ashley Williams’s equalizing header off a corner was entirely unmarked by a befuddled Jordan Lukaku. Notably, the younger Lukaku again lost his mark before halftime, giving Williams a second unmarked header, though this one went over the crossbar. And without taking anything away from Robson-Kanu’s ingenious Cruyff turn goal (Thomas Meunier was the main defender in this case), it’s hard to believe that the move would have sent three defenders off covering a feinted pass in a more settled defense. The overcompensation suggested poor communication and a lack of trust, and much of that is surely down to the enforced changes.

But Marc Wilmots cannot escape his share of the blame, no matter how much he tried to throw his young defense under the bus in a post-match press conference. As goaltender Thibault Courtois noted in his press conference, the team had repeated the game plan that had led to defeat against an Italian back three in the group stage. Both interviews suggest a manager who has little rapport with his players.

Indeed, some would suggest that Wilmots has learned little from any of his games in charge. The substitutions in this game were predictable and largely ineffective, even if Belgium did look briefly more impressive following the introduction of Wilmots’ totem and lightning rod for criticism, Marouane Fellaini, at the start of the second half. None of his changes altered Belgium’s formation, except arguably Dries Martens, who replaced Jordan Lukaku without defending. He shared the space out left with Eden Hazard, in a more disciplined but not particularly useful manner. Instead, it was Welsh substitute Sam Vokes who scored the final goal 5′ after his introduction, assisted by a Chris Gunter cross off the flank from which Jordan Lukaku had been removed.

Wales will face a much sterner test on Wednesday against a Portugal side that is utterly solid in defense from the midfield back, if far less than the sum of its parts going forward. Moreover, they will do so without defender Ben Davies and the influential Aaron Ramsey. The chances are slim of it being as entertaining as this match, but one of the contestants will find themselves in the finals.