‘Til I Die, A Club Transformed 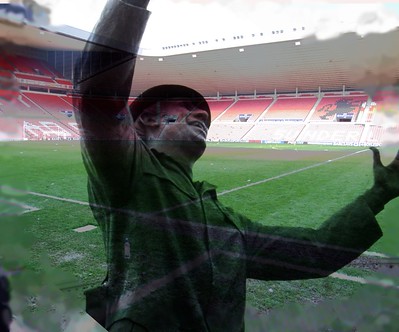 Just over a month ago, the second season of the behind-the-scenes documentary, Sunderland ‘Til I Die was released on Netflix to a world primed by pandemic closures and Tiger King binge-watching. I never dipped into the well-received first season, released in the winter of 2018, and with the rest of the football world on hiatus, this seemed like the right time to catch up.

But as I was getting started, an eye cast over my quarry of unread football books came to rest on Jonathan Wilson’s Sunderland: A Club Transformed. By far the narrowest and most personal of Wilson’s books, it focuses on Sunderland’s last season in the Championship prior to the 2017-18 campaign featured in the opening season of the documentary. Though I was mainly motivated by a recognition that if I didn’t read the book now I almost certainly never would, it proved a perfect companion to ‘Til I Die, helping to highlight the strengths and weaknesses of the documentary’s vision.

The first season of Sunderland ‘Til I Die had been much reviewed by the time that I started watching, and the praise that it had received undoubtedly shaped my expectations. Like most viewers, I knew in advance where this train wreck was headed; though not a close follower of the Championship, Sunderland’s 2nd consecutive relegation was the sort of story that even moderately informed Premier League fans were unlikely to miss. Though I don’t think I read any specific reviews (beyond perhaps a paragraph in the “TV Watch” column from When Saturday Comes), my sense was that this documentary went beyond the typical clichés of with-consent sports documentaries, offering an anatomy of the club’s dysfunction.

I didn’t feel that the first season quite lived up to these perhaps unrealistic expectations, though I definitely enjoyed it. It was very well produced, had a compelling cast of characters, and benefited from its downwardly spiraling storyline. But I didn’t feel it transcended that genre, nor did I feel like I gained a deeper insight into the club’s dysfunction–just a closer seat to the action.

The slickness of the game footage, in particular, felt a bit overproduced.  It reminded me of Janice Radway’s argument about the rhetoric of romance novels being designed to reassure readers that they are understanding the story. Though the games ostensibly capture the uncertainty of competition, music and framing strongly signal how we should be feeling about Sunderland’s chances, whether they are doing well or poorly or in a transition from one to the other; and the goals come quickly to confirm that we have “read” the game correctly. Though framing is inevitable in a 5-minute game highlight, the rhetoric adopted here feels like it’s designed to be welcoming to novice viewers, possibly to soccer-curious American newcomers.

Probably the greatest strength of the ‘Til I Die is its depiction of Sunderland fans, which is sympathetic and strongly grounds the documentary in its locality. While I don’t think that these segments teach us anything new about supporting a club, they speak powerfully to its role in the local community and provide the context in which Sunderland’s success or failure can matter to neutral viewers.

In my view, the second season has two advantages over the first. First, the team’s new ownership prove much more open and co-operative partners, giving viewers at least the illusion of a fuller view of the business side of the club. Both owner Stewart Donald and his lieutenant, Charlie Methven, give enough access to create compelling television; and they each in their own way complicate the stereotypes of club ownership and administration.

Donald is generally given the humanizing treatment. His disagreement with his wife, across their kitchen table, about whether owning Sunderland is healthy for their family is of a piece with the intimate portraits of club supporters. Methven, on the other hand, a self-described untrustworthy Southerner, carries the burden of defending the business side of football. The extent to which he looks and sounds like a money man lends him an ambivalent charisma that makes for better television than his more restrained first-season counterpart, Martin Bain. This tension actually lends power to his surprisingly persuasive case for a healthy business model: that the sustainability of a revenue-supported club is the only path for supporters to become its real stakeholders.

The second advantage, at least for this viewer, was the potential for a surprise ending. 2018-19 was a challenging period for me personally, and even in the best of times I am not attentive to the League One table. While not every viewer will have been as ill-informed as I was, I think more viewers are likely to come to the second season with at least the possibility of genuine suspense as to the outcome.

That lack of knowing had real dividends as a largely successful League One season trended toward promotion, and binge-watching helped me avoid the temptation to google the suspense away. With an equally compelling if somewhat different cast of players, and with the portrayal of supporters further allying my sympathy, I found myself rooting for Sunderland’s success, and worrying at their setbacks. Even with the forewarning of the highly-produced game footage, I found myself cheering critical goals despite my sense that they were coming. Surely this enlisting of sympathy is a measure of the documentary’s success: by the later episodes, I was able to imagine myself as a Sunderland supporter.

As with the first season of ‘Til I Die, there is no suspense about the outcome of Jonathan Wilson’s account of Sunderland’s 2006-07 Championship season. Though I was not aware of Roy Keane’s role in returning Sunderland to the Premier League, the book makes no secret of its end point. This is proper for a work primarily aimed at Sunderland supporters. Published in the immediate aftermath of Sunderland’s return to the Premier League and prior to the release of Wilson’s influential Inverting the Pyramid, it is really a fan’s memento of that special season. Over fourteen chapters–the same as the total number of episodes of ‘Til I Die–Wilson recounts and muses on Sunderland’s journey.

Wilson’s writing is no less sharp than elsewhere, and there are lovely insights about the relationship of North to South and of Sunderland to Newcastle, as well as some probing reflections on Roy Keane, the one figure in the book undoubtedly grand enough to draw a general audience’s interest. Every chapter ends with a brief final section, separated by an icon of the Wearmouth Bridge, in which Wilson offers a more personal account of a return visit to Sunderland in something like the vein of Fever Pitch. I had not known that Wilson spent a year in a Himalayan monastery in the mid-90s.

Having said that, the intensity and narrowness of focus makes it a difficult book to recommend for readers who are not deeply interested in Sunderland. This is less a criticism of the book than a recognition of its intended audience: other Sunderland supporters. For that audience, 48 match reports constitute a pleasant invitation to revisit a fondly remembered journey, not unlike Wilson’s own journey, chronicled at each chapter’s end, of walking from the site of Sunderland’s former home, Roker Park, to its current one at the Stadium of Light. For a general fan, however, it runs the risk of being a long slog.

And yet, Wilson’s book captures truths about the inner lives of football supporters which the more easily digested portrayals in ‘Til I Die fail to communicate. In discussing Roy Keane’s personal history with Sunderland’s past manager, Mick McCarthy, and its then chairman, Niall Quinn–all Irish internationals who had publicly fallen out at the 2002 World Cup–Wilson notes that, “Football is an enclosed world with a limited cast, and has a habit of offering up quirks and coincidences” (68). As his book amply demonstrates, the even more narrowly enclosed world of a supporter comes to be structured around these perceived recurrences.

The experience of synchronicity pervades Wilson’s account of the season. Some instances are banal: the inevitability of away losses to Crystal Palace or the traditional Boxing Day loss to Leeds United, the special (amicable) relationship between Sunderland and Norwich City fans. But others speak to the living presence of the club’s past. A season opener against Coventry City spirals back into their role in Sunderland’s 1977 relegation through a suspiciously late-starting, mutually-beneficial tie with Bristol Rovers on the final day of the season. A shaky opening under Quinn’s management (prior to Keane’s arrival) recalls 1985’s appointment of popular former player, Lawrie McMenemy, a disaster which would see him rebranded “Mackem-enemy.”

This pervasive sense of club history is not Wilson’s alone. When a drunken rendition of a chant from Quinn’s playing days sees supporters thrown off an Easyjet flight for serenading their hero, and he responds by paying £8000 in cab fare to get them home, they revise “Niall Quinn’s disco pants” into “Niall Quinn’s taxi cabs.”

Having said that, Wilson’s historical penchant is perhaps stronger than the average fan’s. A routine series of games against Leeds United and Preston North End takes him first to the 1937 FA Cup win against the latter (the unmentioned 1973 win against Leeds being the greatest upset in FA Cup history) and then on to the Team of Talents who were the equals of Preston’s Invincibles, undefeated in the inaugural 1888-89 season (Sunderland were denied entry to the fledgling league). Quinn’s refusal to move a game against Derby County from Saturday to Monday night puts Wilson in mind of a 1933 FA Cup semifinal replay, also against Derby, when the mines and shipyards closed a half day in order to allow fans to attend. His musings on the historical relationship between Sunderland and Newcastle include querying whether the great medieval scholar Bede, born near and initially entering Sunderland’s St. Peter’s monastery, would have really spent his adult life away from that world class library at Newcastle’s St. Paul’s cathedral, as “most modern accounts suggest” (152) he did.

This absorption in a club’s and community’s history is not as photogenic as the depiction of place and supporters in ‘Til I Die. It does not tempt you into imagining that you are a Sunderland supporter, or implicitly whisper that we are all really the same. It highlights our differences, and when delivered less eloquently than Wilson does here, it is likely to be irritating and off-putting. There is a reason that the documentary, seeking a broader audience beyond the existing tribe, speaks in a gentler, more appealing voice. But I suspect that Wilson’s intimate letter to a fellow traveler points to a deeper truth about the shaping nature of our respective fandoms.