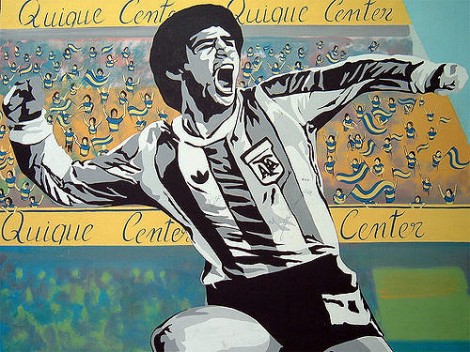 Jonathan Wilson’s most recent book fills a notable gap. While there are a number of popular accounts of Brazilian football (most recently David Goldblatt’s Futebol Nation) and of South American football more broadly (often written by Uruguayans, such as Eduardo Galeano’s Football in Sun and Shadow or Andreas Campomar’s ¡Golazo!), Wilson has provided the first English-language popular history of Argentine football. It is an authoritative and engaging work that holds up alongside the best of Wilson’s previous writing, such as his biography of Brian Clough or his history of tactics, Inverting the Pyramid.

As for many others, Wilson’s Inverting the Pyramid played an important role in developing my understanding of the beautiful game. Having been introduced to tactical thinking through the match analyses of Michael Cox’s zonalmarking, Wilson not only added a historical dimension to my understanding, but also clarified the tensions underlying tactical thought and the cyclical response and counter-response through which it develops.

What was most attractive in Wilson’s writing was his insistence on looking again rather than accepting truisms about how teams and managers approached the game. This led to measured, thoughtful assessments of how teams and their tactics worked in practice, as well as the recognition that the best teams tended to find that elusive mixture of defensive solidity and attacking fluidity. Careful, balanced, thoughtful. Wilson’s willingness to question assumptions no doubt also played a significant role in his founding of The Blizzard, the gold standard among independent football magazines and a venue that has provided a platform for thoughtful English-language football journalism from around the world.

In recent years, Wilson’s piece work has increasingly taken on a curmudgeonly tone reminiscent of football-writing doyen Brian Glanville. Revised structures of the World Cup and Euros, the Champions League, international football more generally, and indeed European football as a whole are all not what they used to be. In contrast to Wilson’s previous iconoclasm, these views tend to reinforce rather than challenging football truisms, at least those of aging fans, a trait they share with Glanville’s bitter view of contemporary football.

A fitting if unfortunately timed example is Wilson’s suggestion in the June issue of World Soccer that Real Madrid’s wealth meant that manager Zinédine Zidane can’t be judged a success even if his side did win a second consecutive Champions League. That assessment looks particularly bitter following a victory that almost certainly came down to Zidane’s redeployment of Isco in the second half, turning what had been a balanced, two-way match into something approaching a rout. While Wilson’s larger point about the impact of money may be true, it seems a far less interesting and challenging truth than actually trying to answer the article’s title-question: “How good a coach is Zidane?”

Angels with Dirty Faces, happily, reveals none of that curmudgeonliness. Instead, it is a tour de force of careful and thoughtful reflection on the development of Argentine football from the first organized game on Argentine soil, arranged and played by British ex-pats on June 20, 1867, to Argentina’s loss to Chile in the final of Copa America 2015, on July 4.

Wilson’s narrative is organized around the waxing and waning in the Argentine game of idealism (la nuestra and menottismo) and pragmatism (anti-fútbol and bilardismo)–the angels and the dirty faces, respectively, of his title (also a nickname of Argentina’s 1957 Campeonato Sudamericano-winning side). Over seven sections, Wilson traces: 1) the early efforts to establish a uniquely Argentine footballing identity distinct from the game’s British progenitors; 2) the rise of la nuestra (our way) via La Máquina, the great River Plate side of the 40s; 3) the responding anti-fútbol of Victorio Spinetto’s Vélez Sarsfield, Manuel Giúdice’s Independiente, and Osvaldo Zubeldía’s Estudiantes; 4) the emergence of Boca Juniors as a continental power and of the idealistic César Luis Menotti’s World Cup winning national side; 5) Diego Maradona’s arrival on field and in the national psyche, and Carlos Bilardo’s reassertion of pragmatic football in Argentina’s second World Cup victory; 6) Maradona’s decline, the merging of menottismo and bilardismo in the coaching philosophies of Óscar Tabáres and Marcelo Bielsa, and Carlos Bianchi’s Club World Cup successes with Vélez and Juan Román Riquelme’s Boca; and 7) Lionel Messi’s emergence as a second coming of Maradonna, though without his international success.

Wilson frames each of these stages in the development of Argentine football within the larger context of the nation’s political history: 1) the self-conscious creation of argentinidad identity at the beginning of the 20th Century, 2) the rise of Juan Perón, 3) the political dissention and decline following his exile in 1954, 4) the military’s junta’s opportunistic use of the 1978 World Cup, 5) the failure to make similar gains in the ill-calculated Falklands conflict, 6) the 90s collapse of the Argentine economy, and 7) the return of Peronismo under the Kirchners. Wilson acknowledges and considers the associations of footballing idealisms with the social democratic elements of Peronismo populism, and of cynical (and oftentimes violent) footballing pragmatism with the ruthlessness of the nation’s conservative military juntas, associations that the politically progressive Menotti quite self-consciously cultivated. But Wilson has no interest in myth-making, and his comments on the political life of Argentina, as on its connections to footballing style, are careful and measured.

So, too, his assessment of great Argentine teams, particularly of those that have come to be associated with anti-fútbol. Wilson recognizes that the term encompasses a variety of different qualities, so that very different kinds of teams have fallen under that label.  Equally, he is alert to the negative capabilities of teams that have earned a reputation for free-flowing football. While judging the accuracy of Wilson’s assessments is beyond the expertise of this reviewer, they are measured and thoughtfully presented.

Even more impressive is Wilson’s ability to hold the reader’s interest over 400 pages of fairly detailed history: of league results, of Copa Libertadores successes (and occasionally failures), of the national team’s performance, and eventually even of some Argentine heroes in Europe. It is a potentially paralyzing amount of information, yet Wilson is able to give this diverse and copious material a sense of order and purpose that keeps the reader’s attention. Each section of the work opens with a thematically evocative introductory chapter, highlighting the larger arc of Wilson’s narrative before delving into more detail-oriented and chronologically-organized chapters. Periodic accounts of contemporary interviews with past Argentine greats offer refreshing interludes as well. The book is a tour de force in balancing comprehensiveness with accessibility.

While a 400 page footballing history is obviously not for all readers, fans of Wilson in particular, or of The Blizzard more generally, should be eminently satisfied. Anyone interested in the development of South American football will find this a welcome edition to the English-language record.