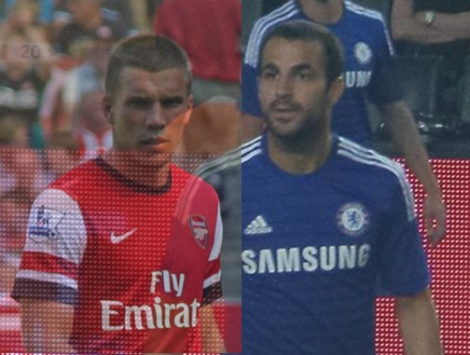 Too busy this weekend to finish a full analysis of Real Madrid’s new look (coming shortly), but here’s some fun stuff to read in the meantime.

First up, this genuinely thought-provoking hit piece on Cesc Fàbregas by Kevin McCauley for SB Nation.  McCauley’s basic argument is that while Fàbregas looks like a dominant player against small sides, he consistently disappears against bigger opposition.  Everton isn’t quite the kind of opposition McCauley has in mind, but they will prove a much sterner test than either Burnley or Leicester City were.  Thus far, Fàbregas has looked one of the best midfielders in the Premier League–which is in line with McCauley’s assessment.  Saturday’s game will be the first real test of the theory.

The second piece is tactical guru Jonathan Wilson‘s assessment of Lukas Podolski’s strengths and weaknesses as a player.  Though definitely less damning than McCauley’s take on Fàbregas, it nonetheless suggests that Podolski’s limitations probably outweigh his strengths for sophisticated sides.  Wilson suggests that Podolski excels on counter-attacking teams where he can employ his pace without any recourse to guile–and (somewhat less surprisingly) that he is either incapable of or unwilling to track back.  It’s unclear when and if Podolski will play next, so there’s no imminent litmus test on this one.

Finally, on an unrelated note, it’s worth noting how similar Jonathan Wilson’s and Michael Cox‘s explanations of Louis Van Gaal’s commitment to three-at-the-back for Manchester United are.  This is Cox’s account, and here’s Wilson’s explanation.  Given the overlap, it’s hard not to believe that they’re onto something.